Physicians in Long-Term Recovery Who Are Members of Alcoholics Anonymous 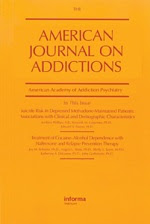 There is little empirical literature on the experience in sobriety of long-term, committed members of Alcoholics Anonymous (AA).


Studies on the experience of long-term members, however, can yield a better understanding of the role of spirituality in AA membership, and how the program helps stabilize abstinence.


We studied 144 physicians at a conference of doctors in AA.


Respondents had a mean period of sobriety of 140 months. Compared to normative populations, they scored higher on scales for depression and anxiety, and were more adherent to the spiritual character of AA, rather than a formally religious orientation. Those who reported “having a spiritual awakening” were more likely to “experience God's presence” on most days (81% vs. 19%) and were less likely to report craving for alcohol (21% vs. 41%) than those who did not. Respondents who had a history of being enrolled in State Physicians' Health Programs did not differ significantly on any of the aforesaid subjective variables from those who were not enrolled.


The experience of long-term AA members can be characterized in terms of abstinence, spirituality, and alcohol craving.

Request Reprint E-Mail:    marcgalanter@nyu.edu
at 6:00 AM