Thinking about drinking: Need for cognition and readiness to change moderate the effects of brief alcohol interventions.

Research has demonstrated the efficacy of brief motivational interventions (BMI) and alcohol expectancy challenge (AEC) in reducing alcohol use and/or problems among college students. However, little is known about variables that may qualify the effectiveness of these approaches.

The present analyses tested the hypothesis that need for cognition (NFC), impulsivity/sensation seeking (IMPSS) and readiness to change (RTC) would moderate the effects of BMI and AEC.

Future preventive interventions with this population may profit by considering individual differences and targeting approaches accordingly.

Excessive alcohol (ethanol) consumption is the hallmark of alcohol use disorders. The F1 hybrid cross between the C57BL/6J (B6) and FVB/NJ (FVB) inbred mouse strains consumes more ethanol than either progenitor strain.

The purpose of this study was to utilize ethanol-drinking data and genetic information to map genes that result in overdominant (or heterotic) ethanol drinking.

About 600 B6 × FVB F2 mice, half of each sex, were tested for ethanol intake and preference in a 24-h, two-bottle water versus ethanol choice procedure, with ascending ethanol concentrations. They were then tested for ethanol intake in a Drinking in the Dark (DID) procedure, first when there was no water choice and then when ethanol was offered versus water. DNA samples were obtained and genome-wide QTL analyses were performed to search for single QTLs (both additive and dominance effects) and interactions between pairs of QTLs, or epistasis.

On average, F2 mice consumed excessive amounts of ethanol in the 24-h choice procedure, consistent with high levels of consumption seen in the F1 cross. Consumption in the DID procedure was similar or higher than amounts reported previously for the B6 progenitor.

QTLs resulting in heightened consumption in heterozygous compared to homozygous animals were found on Chrs 11, 15, and 16 for 24-h choice 30% ethanol consumption, and on Chr 11 for DID. No evidence was found for epistasis between any pair of significant or suggestive QTLs.

This indicates that the hybrid overdominance is due to intralocus interactions at the level of individual QTL.

Pancreatic β-cell dysfunction is a prerequisite for the development of type 2 diabetes. Alcoholism is a diabetes risk factor and ethanol increases oxidative stress in β-cells, whereas the mitochondrial chaperone prohibitin (PHB) has antioxidant effects in several cell types.

In the present study we investigated whether PHB is expressed in β-cells and protects these cells against deleterious effects of ethanol, using INS-1E and RINm5F β-cell lines.

Thus, PHB is expressed in β-cells, increases with oxidative stress and protects the cells against deleterious effects of ethanol.

Binge drinking is a common pattern of alcohol use in the US. However, no studies have evaluated the effectiveness of brief interventions targeting only binge drinkers.

To assess the metabolic changes associated with this deficit, 1H MRS was carried out in the occipital lobe of alcohol dependents.

A large collection of presentations covering the most up to date international research, learning and developments in the in field of brief interventions for alcohol are now available . . . . .

Alcohol abuse, together with tobacco use, is a major determinant of health and social well-being, and is one of the most important of 26 risk factors comparatively assessed in low and middle income countries, surpassed only by high blood pressure and tobacco.

The alcohol consumption patterns and the associations between consumption of alcohol and socio-demographic and cultural factors have been investigated in nine rural Health and Demographic Surveillance System (HDSS) located in five Asian countries.

Alcohol was rarely consumed in five of the HDSS (four in Bangladesh, and one in Indonesia). In the two HDSS in Vietnam (Chililab, Filabavi) and one in Thailand (Kanchanaburi), alcohol consumption was common in men. The mean number of drinks per day during the last seven days, and prevalence of at-risk drinker were found to be highest in Filabavi. The prevalence of female alcohol consumption was much smaller in comparison with men. In Chililab, people who did not go to school or did not complete primary education were more likely to drink in comparison to people who graduated from high school or university.

Although uncommon in some countries because of religious and cultural practices, alcohol consumption patterns in some sites were cause for concern. In addition, qualitative studies may be necessary to understand the factors influencing alcohol consumption levels between the two sites in Vietnam and the site in Thailand in order to design appropriate interventions.

A new definition of early age at onset in alcohol dependence

The early onset of alcohol dependence is best defined as beginning before the age of 22 years.

Alcohol dependence (AD) is clinically and etiologically heterogeneous. The goal of this study was to explore AD subtypes among a sample of 1221 participants in the Irish Affected Sib Pair Study of Alcohol Dependence, all of whom met DSM-IV criteria for AD.

Using latent class analysis, a 3-class solution was identified as the most parsimonious description of the data. Individuals in a Mild class were least likely to have comorbid psychopathology, whereas a severe class had highest probabilities of all comorbid psychopathology. The third class was characterized by high probabilities of major depression and higher neuroticism scores, but lower likelihood of other comorbid disorders than seen in the severe class.

Overall, sibling pair resemblance for class was stronger within than between classes, and was greatest for siblings within the severe class, suggesting a stronger familial etiology for this class.

These findings are consistent with the affective regulation and behavioral disinhibition subtypes of alcoholism, and are in line with prior work suggesting familial influences on subtype etiology. 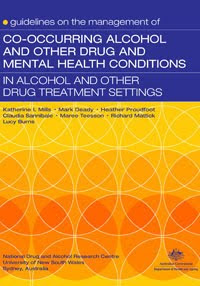 The Australian Government Department of Health and Ageing funded the National Drug and Alcohol Research Centre (NDARC) to develop guidelines on the management of co-occurring mental health conditions in alcohol and other drug (AOD) treatment settings. The Guidelines are based on the best available evidence and draw upon the experience and knowledge of clinicians, researchers, consumers and carers.

The urgent need to tackle Britain’s drink-fuelled violence and health problems has led to calls for a minimum retail price for alcohol. But rather than reduce consumption of alcohol, new research shows that if the price of alcohol was significantly increased in supermarkets, only 21% (just over 1 in 5) of adult British drinkers said they would buy less alcohol and spend the same amount as they do now.

The research is published today in the Wilson Drinks Report, a new research based report on industry trends and changing consumer attitudes relating to the sale and consumption of alcohol in the UK.

Although gaining support, minimum pricing may do little to cut consumption. Over half (52%) of adult drinkers said they would either spend more on the same amount of drink or look for cheaper alternatives, including switching to cheaper brands and drinks. . . . . .

While excessive drinking is associated with lower earnings through adverse health effects, absenteeism and low productivity, moderate acohol consumption has been argued to generate positive wage effects. These positive wage premiums are usually expected to arise from the social effect of drinking and the beneficial health consequences of drinking in moderation.

Using unit-record data from the Australian National Drug Strategy Household Survey, this paper examines the impact of drinking patterns on individuals’ earnings, controlling for selectivity bias driven by the endogenous relationship between drinking and earnings.

In particular, a Multinomial Logit Selectivity model is estimated for four drinking statuses.

This study shows that frequent bingeing is associated with reduced earnings whilst non bingers and occasional bingers earn a positive premium over abstainers.

Further, a decomposition of the earnings differentials indicates that, across various occupations, abstainers are at least as, if not more, ‘productive’ than drinkers and frequent bingers are less ‘productive’ than non bingers and occasional bingers.

The aim of this paper is to analyse a tax reform consisting of an increment of the indirect taxes on alcohol and tobacco to finance the elimination of VAT on health and pharmaceutical services.

We first estimate an Almost Ideal Demand System for the purpose of evaluating expenditure and price elasticities. We then micro-simulate the abolition of VAT on health services combined with a increment on alcohol and tobacco excise duties, so that total revenue remains unchanged.

This reform would generate small private and social welfare gains complemented with externalities derived from the tobacco and alcohol demand cut.

Alcohol abuse and dependence symptoms: A multidimensional model of common and specific etiology

Social norms, perceived utility of alcohol use, and family history of alcohol problems were indirectly associated with Time 2 abuse and dependence symptoms through influencing level of alcohol consumption.

A multigroup analysis showed that high levels of poor control increased the strength of paths from both consumption level and affective lability to abuse symptoms.

Implications for prevention of alcohol problems among college students are discussed.

This document provides good practice guidance on the development of integrated care pathways for people with alcohol problems – alcohol treatment pathways (ATPs). It is illustrated with a number of examples but is not intended to provide an exhaustive resource of off-the-shelf pathways.

Reinstatement of responding to a previously alcohol-associated lever following extinction is an established model of relapse-like behavior and can be triggered by stress exposure. Here, we examined whether neuropeptide Y (NPY), an endogenous anti-stress mediator, blocks reinstatement of alcohol-seeking induced by the pharmacological stressor yohimbine.


The analysis was focused on a network of structures previously implicated in yohimbine-induced reinstatement, comprised of central (CeA) and basolateral (BLA) amygdala and the shell of the nucleus accumbens (Nc AccS). Within this network, both yohimbine and NPY potently induced neuronal activation, and their effects were additive, presumably indicating activation of excitatory and inhibitory neuronal populations, respectively.

These results suggest that NPY selectively suppresses relapse to alcohol seeking induced by stressful events and support the NPY system as an attractive target for the treatment of alcohol addiction.

The aim of this conference is to bring together European researchers, public health workers, and FAS-related NGOs for the first time in order to share knowledge and promote collaborations. Presentations will cover latest developments worldwide, with an emphasis on European experience:

Perceived Need for Treatment for Alcohol Use Disorders: Results From Two National Surveys

In both surveys fewer than one in nine individuals with an alcohol use disorder perceived a need for treatment. In predicting perceived need, the explanatory power of diagnostic variables was much greater than that of demographic variables. Among those with perceived need, two out of every three persons reported receiving treatment in the past year.