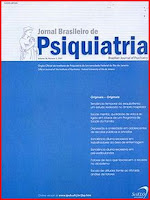 To detect factors associated to previous suicide attempt among patients admitted to a general hospital who presented harmful alcohol drinking pattern.
4.352 patients consecutively admitted were screened by means of the AUDIT (Alcohol Use Disorder Identification Test) and HAD (Hospital Anxiety and Depression Scale). Qui-squared tests and multiple logistic regression were performed.
423 individuals presented alcohol harmful use or dependence (AUDIT > 8), 60 (14.2%) of which had depression (HAD > 8) and 34 (8%) previous suicide attempt. The latter was more frequent among young adults [odds ratio (OR) = 3.4], those who were depressed (OR = 6.6), had previously taken psychotropic medicines (OR = 7) and had AIDS (OR = 24).
Our findings reinforce the need for detection and adequate treatment of conditions that, when together, strongly increase the suicide risk.
Read Full Article    (PDF)
at 10:22 PM