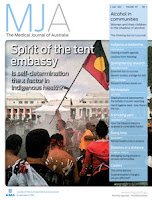 "The girls don’t drink much; ’bout the same as the fellas”

I am an Aboriginal woman, with traditional connections to the Bidjara people from central western Queensland and extensive experience in working with Aboriginal women who consume alcohol during pregnancy.

During several decades of working in the health field, I have asked myself and others why Aboriginal people drink alcohol at such dangerous levels.

As I have reported earlier,1 I believe that the historical and political background and the cultural aspects of drinking have been insufficiently considered. There is an entrenched expectation of Aboriginal community members that to drink is an expression of identity and culture.

It is unrealistic to expect that individuals can take responsibility for their own actions outside the context of their cultural environment. Programs aimed at changing individual risky behaviour fail to acknowledge the way in which the person is inextricably tied to the culture in which he or she exists.

In many communities, alcohol use is a familiar and embedded practice that spans generations as well as individual lifetimes, from before birth to death. Its consequences are difficult to escape, whether a given person actually drinks or not.

Some years ago, with input from a number of Aboriginal community members, I constructed a framework to assist in understanding the development of identity and the resulting changes of emotions and physical boundaries across the lifespan. > > > > Read More